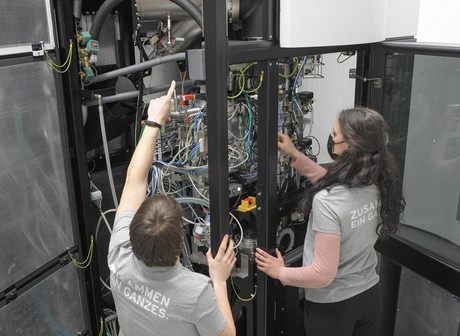 A small home for a big microscope

The new cryo-electron microscope on the Buch campus is four meters tall and captures images of tiny, nanometer-scale structures. The Max Delbrück Center for Molecular Medicine in the Helmholtz Association (MDC) has constructed a special building to house this feat of technology, which is now available to Berlin’s structural biology community. Dr. Christoph Diebolder of Charité – Universitätsmedizin Berlin heads the facility.

Dr. Christoph Diebolder wants to know what holds the world together at its innermost core. He wants to understand the biochemical processes by which the smallest pieces of the puzzle of life fit together, and to render visible what happens when molecules within a cell collide.

Since February 2020, the structural biologist has been director of the newly established Core Facility for Cryo-Electron Microscopy (cryo-EM) run by Charité together with the MDC and the Leibnitz-Forschungsinstitut für Molekulare Pharmakologie (FMP). Previously, he spent more than ten years in the Netherlands, where he worked as a scientist at the Netherlands Centre for Electron Nanoscopy (NeCEN), among others. Located on the Buch campus, the cryo-EM facility has been in test operation for almost a year, and officially went into regular operation in March. With cryo-EM, it is possible to render nanometer-sized biological molecules visible “at a resolution that rivals crystallography,” says Dr. Diebolder enthusiastically. He will give his welcome lecture on April 13.

Cryo-EM has a decisive advantage over X-ray crystallography, explains Prof. Dr. Oliver Daumke, as it can also be used to image three-dimensional structures such as proteins. Prof. Daumke’s research at the MDC focuses on proteins that carry out important functions within the cell by deforming cellular membranes during energy consumption. “While crystallography produces an image of an isolated protein, the special thing about cryo-electron microscopy is that it allows us to look at proteins not only in isolation, but also in their cellular environment,” says Prof. Daumke. “And it eliminates the need to crystallize them beforehand.”

The centerpiece of this technology platform is a four-meter-tall cryo-transmission electron microscope (cryo-TEM). It stands like a huge vault in a high-ceilinged white room, where a ventilation system emits a constant hiss. This is a necessary feature, as the device is just as sensitive as it is large, and unable to tolerate temperature fluctuations or excessive humidity. The room’s humidity is therefore kept under 20 percent, which means visitors get thirsty very quickly. Vibrations and electromagnetic fields are also problematic. A concrete foundation 1.25 meters thick has therefore been placed underneath the building to cancel out underground vibrations. Otherwise, the campus bus passing by 100 meters away would interfere with the measurements. And with its double walls, the building is also a sort of house within a house. “We put a lot of effort into making sure our microscopes are happy,” says Dr. Diebolder.

Dr. Diebolder clearly remembers the moment he switched on the cryo-TEM for the first time a year ago: “This can be a moment of great disappointment. But in this case it was wonderful, because we received very high-quality data.” Researchers in Berlin can now use the state-of-the-art technology for their own projects, with the support of the cryo-EM team. This support can include preparing samples, taking the measurements, and assisting in the evaluation and modeling of the data. Alongside Diebolder, Dr. Thiemo Sprink (MDC) and Metaxia Stavroulaki (Charité, funded by the FMP) work in the new facility – which is a plain, cube-shaped building clad in dark-brown wood. A desk runs lengthwise through the room with four workstations, each equipped with several screens. The view from the window is currently 2,400 m2 of sand, which will soon be the site of another construction project: This is where the MDC’s Optical Imaging Center (OIC) is scheduled to open in one year’s time.

Dr. Diebolder became passionate about electron microscopy while studying technical biology in Stuttgart. That was in the 2000s, and cryo-EM did not exist there at the time. Nevertheless, Dr. Diebolder became fascinated, as even a conventional electron microscope enables a view of individual atoms. This is possible because electron beams achieve a much higher resolution than light, thanks to their shorter wavelength. However, the samples must first be dehydrated, chemically fixed and stained with heavy metals to enhance image contrast. In other words, what the electron beam makes visible is not the natural state of a molecule, but what remains of it after this treatment.

It is only thanks to cryo-EM that scientists no longer have to interpret artifacts, but can actually look at natural structures. In 2017, the Swiss Jacques Dubochet, the German-American Joachim Frank and the Scot Richard Henderson were awarded the Nobel Prize in Chemistry for developing this new type of microscopy. In this process, molecules are cooled so quickly that ice crystals cannot form. Instead, glasslike amorphous ice is formed, which tightly encloses the molecules in their natural state. The electron beam can penetrate the ice layer. A camera installed in the lower part of the microscope records the image. A computer calculates an exact three-dimensional image of the molecule from what are often hundreds of thousands of photos – with unprecedented accuracy and detail. The resulting images often reveal an unexpected beauty and symmetry that an architect could not have designed better.

The remote realms into which the researchers are penetrating with the electron beam can also be seen in the contrast between the size of the microscope and the small size of the sample it can illuminate. A cell one micrometer in diameter would be too thick; 300 nanometers are the maximum. To be able to prepare such delicate specimens, the researchers at the facility have another top-class instrument at their disposal: a dual-beam FIB SEM, which is a cryo-scanning electron microscope with a focused ion beam. An electron-permeable lamella is milled out of the flash-frozen sample, such as a human cell, with the ion beam. To get precisely the section to be viewed in the cryo-TEM, Metaxia Stavroulaki can mark the corresponding molecules beforehand using a cryo-CLEM, a correlative light electron microscope. The lamella, this very tiny sample, then goes into the cryo-TEM.

In addition to providing services to researchers and their projects, Dr. Diebolder and his colleagues hope to further develop and refine this work flow – from cryo-CLEM to dual-beam FIB SEM and cryo-TEM to data preparation and model calculation. “We would like our work to advance structural biology in a methodical way,” says Dr. Diebolder, describing his vision. “Our goal is to move from in vitro to in situ, that is, to observe processes directly in the cell.”