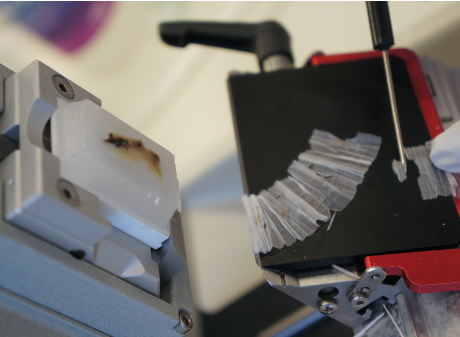 The radioisotope-based visualization of chemical components has formed an integral part of Sanger DNA and RNA sequencing for more than three decades. A gradual increase in fluorescence-based approaches since the final years of the 20th century has coincided with a gradual decline in sequencing techniques which use radioactively labeled nucleotides. Despite these developments, radionuclides remain an irreplaceable part of biomedical research, for instance in the manufacture of recombinant proteins, the study of enzyme reactions, and the identification of enzyme-substrate pairs. For this reason, Charité ensures its researchers have access to its central radionuclide laboratories.

Thanks to the excellent laboratory facilities and equipment available, Charité members of staff can conduct research involving a range of radioactive substances on three of Charité’s campuses (CCM, CVK, and CBF). All organizational matters will be handled by members of staff of the ZRNL. This allows researchers to focus all of their attention and time on their work (following the completion of their radiation safety training).

Some of the services on offer include:

Depending on the site, the following devices may be available: