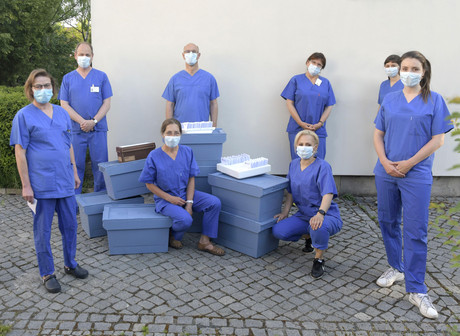 Berlin's Testing Strategy at the Charité

The Berlin Testing Strategy team at Charité, in collaboration with Vivantes GmbH and the Berlin Senate, is designing effective strategies and measures to deal with the Sars-CoV-2 pandemic, monitors their implementation and evaluates them scientifically. The focus is on testing asymptomatic individuals, especially those at risk in Berlin.

Find out more about scientific studies and other projects related to CoViD-19 on the microsites of the Berlin Testing Strategy.

Objectives of the Berlin Testing Strategy

One focus of the project group at Charité is to conduct scientific studies.

In May 2020, the project team defined from a scientific point of view population groups for the testing strategy that have an increased risk of severe disease progression or an increased risk of spread. These populations were to be tested for possible asymptomatic disease progression. The focus was on healthcare facilities, nursing facilities, schools, and daycare centers.

The following asymptomatic populations were tested between May 2020 and October 2020:

Additional testing took place among employees of the Berliner Stadtreinigung (BSR), in refugee shelters, among employees of community facilities, and among travelers returning home. The originally planned additional tests at locations with an increased risk of spread, such as in the catering industry or in jails, could not be implemented so far due to the increase of the number of cases and the associated utilization of testing resources.
Testing was offered at various locations of the Vivantes network, at the Havelhöhe Community Hospital, at the Charité - Campus Virchow-Klinikum and by mobile teams.

Since September 1, 2020, the responsibility for the coordination of the testing strategy and the implementation of the tests lies with the Senate Department for Health, Care and Equality. Since then, Charité has been focusing more on developing new concepts geared to the post-pandemic period on the one hand, and on scientifically evaluating the collected data and gaining new insights on the other.