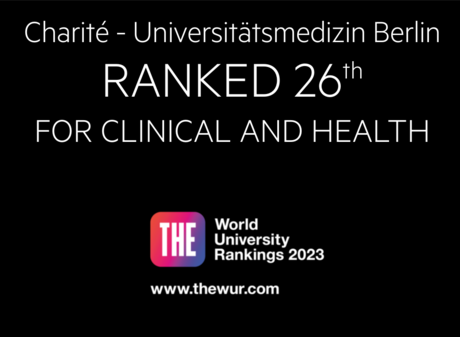 Charité – Universitätsmedizin Berlin secured position 26 of 1,001 universities scored in the global Times Higher Education (THE) World University Subject Ranking 2023 “Clinical and Health” category, rising six ranks from the last THE Ranking and again ranking first among the medical faculties in Germany. The Times Higher Education Ranking is acknowledged as one of the leading rankings of higher education worldwide.

For five years running now, Charité has risen in the departmental THE Ranking in medicine, from rank 55 in 2018, its first year of listing, to rank 26 in the latest THE edition. Among the renowned institutions ranking below Charité in this category are the University of Chicago (USA), the University of Tokyo (Japan), and Monash University (Australia). Within the EU, it ranks second behind Swedish Karolinska Institute. Charité performs particularly well in the citations sub-category, which reflects an institution's research influence. It has also strengthened its international outlook score over the previous year’s.

The global leaders of the THE ranking continue to be higher education institutions in the UK and the U.S. As part of the Berlin University Alliance (BUA), the European University Hospital Alliance (EUHA) and the M8 Alliance, Charité has strategic partnerships with numerous top 20 university hospitals. Within Germany, Charité is the top-ranking hospital for the second year running, followed by the University of Heidelberg (rank 38), LMU Munich (46) and TU Munich (60).

Prof. Dr. Axel R. Pries, Dean of Charité, says: “Ranking among the top 30 medical institutions worldwide is an extraordinary achievement that reflects the Charité’s growing international cachet. This success is due to the outstanding performance of our teams in research and teaching, and the support of the Charité faculty and staff. I commend all of them! We all pull together to advance medicine and Charité a little bit each day – regardless of the pandemic, war and energy crisis.”

The latest edition of the multidisciplinary THE World University Ranking, published in mid-October, ranks the Charité as 73rd of 1,799 universities, the same place as the previous year. This corresponds to rank 4 of the 50 participating universities in Germany.

About the Times Higher Education World University Ranking
Published annually by the London-based Time Higher Education Magazine (THE), the THE World University Ranking is a global performance survey that scores research-oriented universities across four areas reflecting their core missions: teaching, research, knowledge transfer and international outlook. The ranking uses 13 calibrated performance indicators measuring performance in five areas: teaching (learning environment), research (volume, income and reputation), citations (research impact), international outlook (staff, students and research) and industry income (knowledge transfer). Charité is evaluated like a university with only one discipline field (health) as the THE Ranking is not set up to reflect the Charité’s particular status as a single medical faculty, which serves both Humboldt-Universität zu Berlin and Freie Universität Berlin. In addition to the global evaluation across disciplines, THE also publishes the ranking for individual departments. The weighting of the performance indicators is adjusted accordingly. Rankings in the category “Clinical and Health” are based on performances in medicine, dentistry, and other health-related subjects.