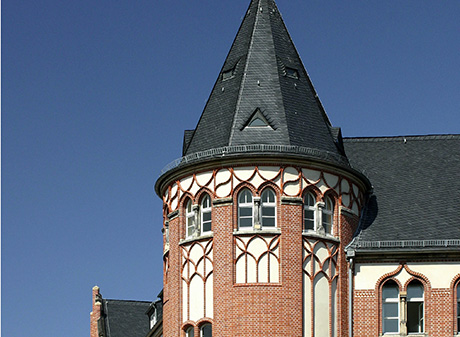 Charité Center 15 for Neurology, Neurosurgery and Psychiatry with the Pediatric Neurosurgery Unit and the Institute of Neuropathology combines neurological, neurosurgical and psychiatric research and care delivery in a way that is unparalleled throughout Germany. The Center is a partner in major international neuroscience networks such as the Bernstein Center Berlin, The Graduate School Mind and Brain and the Excellence Cluster NeuroCure.

The Center for Stroke Research (CSB) has been funded since 2008 by the  Federal Ministry of Education and Research (BMBF) as an integrated research and treatment center. Stroke research at the CSB is interdisciplinary, and ranges from basic and clinical research through to health care research.

The Charité Center 15 comprises four departments and one institute:

The Institute of Neuropathology with Pedriatic Neurosurgery is essential for diagnostic clarification. Examinations performed here include the assessment of specimens from the central nervous system, spinal fluid samples and neuromuscular biopsy specimens.

Patients present to the Department of Neurosurgery with cerebrovascular diseases and brain tumors, acute craniocerebral injuries and spinal diseases. Epilepsy surgery is performed here, and functional neurosurgical techniques are applied (e.g., the “brain pacemaker” for movement disorders). Neurosurgical interventions for children and adolescents are carried out by the independent Pedatric Neurosurgery Unit.

The Department of Neurosurgery diagnoses and treats strokes and inflammatory diseases such as multiple scleroses as well as movement disorders and degenerative diseases (e.g., Parkinson’s disease, amyotrophic lateral sclerosis (ALS) and dementias). Another focus is epilepsy. The Department is affiliated with a Department in Experimental Neurology and the Berlin Neuro Imaging Center (BNIC).

From 2004 to 2006 the Center attracted over 23.5 million Euros in third-party funds that finance more than 130 staff members via research projects. The publication productivity score was nearly 4,500 impact points during the same period of time.