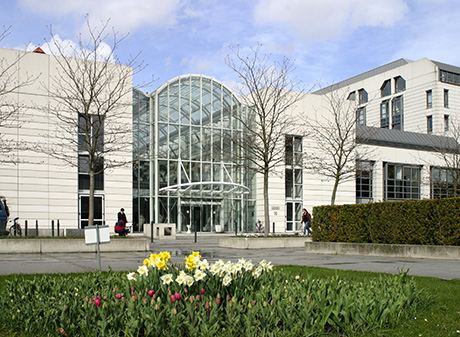 On Rudolf Virchow´s initiative, a fourth municipal hospital was erected in northern Berlin - in the district Wedding - between 1898 and 1906. The Rudolf Virchow Hospital was the last to be built in the so-called pavilion style. The building costs reached 19.1 million imperial marks. Fifty-seven individual buildings with 2,000 beds were distributed over an area of 270,000 m2. It was possible for 700 physicians, nurses and other employees to live on the grounds.

Behind the three-story main building on the Augustenburger Square, the main 500-meter-long green axis with a chestnut-lined street stretched to the west. The pavilions were located along the street: one side for surgical patients, the other for patients with internal problems. Benches, lawns, flower beds and a fountain gave the grounds a park-like feeling.

When the hospital was rebuilt after World War II, the pavilion structure disappeared almost completely. In 1986 the hospital, located in West-Berlin, was placed under the Free University. The institution, called the "“Rudolf Virchow University Clinic" since 1987, switched in 1995 to the Humboldt University.

In 1997/98 it was fused with the historical Charité and the Robert Rössle and Franz Volhard clinics in Buch to become the "Charité Medical Faculty of the Humboldt University of Berlin".