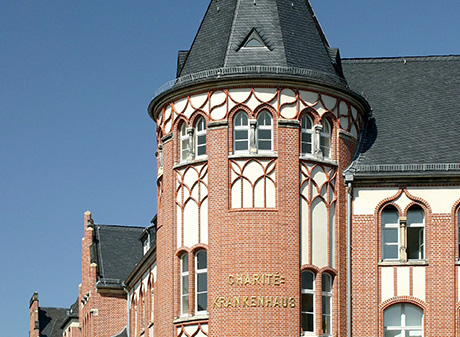 The history of the Charité dates back to the year 1710.  At that time the plague posed an imminent threat, and King Frederick I of Prussia had a quarantine hospital built outside the city gates.  After the plague spared the city, the building was used during the next 17 years as a hospice for destitute old people, a workhouse for beggars, and a maternity home for unmarried mothers.

In 1727, King Frederick William I decreed that the quarantine hospital would become a military hospital and infirmary as well as a training center for future military physicians.  "The house shall be called Charité" was written as a marginal note in one of his letters.  The Royal Charité Hospital was starting to become an important medical facility:  it had storeys added, was expanded to 400 beds, received ample financing, and provided a bed for each patient.  The impetus for these developments came from the Prussian Medical Edict of 1725, which was issued to regulate the training of healthcare professionals.  It set the standards for a century.

Medical studies were placed on a solid theoretical and practical foundation whose implementation was state-controlled through the Collegium Medico-Chirurgicum (Medical-Surgical School) in Berlin.  The curriculum focused on the education of military surgeons, who had been receiving practical clinical training at the Charité since 1727.
The Charité thus had three functions:  it was a hospice for the poor (until 1798), a state hospital, and a teaching facility to train future military physicians for the steadily growing Prussian army.  Thus it soon lacked adequate space and was torn down for the first time between 1785 and 1797.
The Charité gained increasing importance as a training center for military physicians after the establishment of a military academy, the Pépinière (plant nursery), in 1795.  It was called the “Frederick William Institute” from 1818 until 1895, when it became the "Emperor William Military Medical Academy".  Here future military physicians received a general academic education.

While the Charité retained its importance as a clinical training center for military physicians from 1727 to 1945, it initially had no part in the academic education of civilian physicians after the University of Berlin was founded in 1810.  Thus medical, surgical/ophthalmological and gynecological clinics were established at the university, and the Collegium Medico-Chirurgicum was disbanded.  These clinics were at first scattered in private apartments until 1818, when construction of a large university medical center started on Ziegelstrasse in the immediate vicinity of the Charité.

The fact that Berlin university medicine and the Charité were mentioned in the same breath was partly due to the establishment of more and more university clinics on the Charité premises over the years.  All the university clinics on Ziegelstrasse eventually moved to the Charité.  The medical clinic was the first one to move in 1828, but the last one, the university surgical clinic, only followed suit a century later in 1927.  Then the Charité finally became a university medical center.  Formally, however, the Charité and the university hospital still remained separate institutions until 1951:  in the GDR they finally merged to form the Medical Faculty (Charité) of Humboldt University.
The turn of the last century saw the nearly complete demolition of Charité facilities and the construction of a uniform new red brick building between 1896 and 1917.  Its generous design was ruined during World War II:  90% of the building was destroyed or damaged.  Its reconstruction after 1945 under the GDR regime included a new tumor clinic (1959) and a dermatological clinic (1960) as well as a bed tower with a utilities tract (1982) and documented the intention of the GDR  to keep the Charité as the state’s showpiece.  It had 2000 beds at that time.  Restoration of the landmark building started after Germany’s reunification and was nearly complete in 2005.

In 1997 Rudolf Virchow Hospital merged with the Charité to form the Charité Medical Faculty of Humboldt University, Berlin.  The associated clinics were also consolidated one year later.  Benjamin Franklin Hospital of the Free University of Berlin was added in 2003.  This marked the beginning of Charité – Universitätsmedizin Berlin, Europe’s largest university hospital.  The Charité is now well on its way toward regaining its past glory and has celebrated its 300th anniversary in 2010.