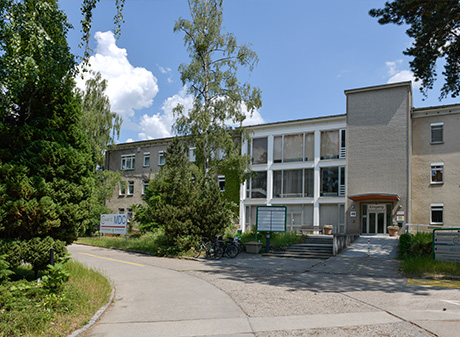 Below you can find the best maps, transport links and information on parking and housing

At the Campus Berlin Buch...

...in northeast Berlin, Charité – Universitätsmedizin Berlin enjoys a partnership with the clinical and research institutions- who specialize in basic research and comprehensive clinical care- as well as with several biotechnology companies.

For more than 100 years, Berlin Buch has served as a key location for health care and research. Between 1900 and 1920, hospitals with more than 5,000 patient beds were constructed in Berlin Buch including the largest hospital in Europe at the time. The clinical environment attracted scientific institutes and, in 1930, the Kaiser-Wilhelm-Institute for Brain Research moved to Buch. Later, the GDR's Academy of Sciences continued the biomedical research tradition here.

Today, the Campus Berlin Buch -comprised of Specialized Clinics for Cancer and Cardiovascular Disease, the Max Delbrück Center for Molecular Medicine (MDC) Berlin Buch, the Leibniz-Institut für Molekulare Pharmakologie (FMP), as well as the biotechnology park with circa 50 companies- is one of the largest biomedical centres in Germany. In addition, further hospitals and clinics call Buch home, such as the Protestant Lung Clinic Berlin (Evangelische Lungenklinik Berlin) and the Rheuma Clinic Berlin Buch.

The Campus Berlin Buch is unique in that the institutions and clinics are in close physical proximity to one another, facilitating interinstitutional as well as interdisciplinary work. Since early 2007, Charité and the Max Delbrück Center for Molecular Medicine (MDC) Berlin Buch have jointly operated a translational research center, the Experimental and Clinical Research Center (ECRC). The goal of the ECRC is to most efficiently transform research findings into clinical applications.

Charité's presence on Campus Berlin Buch is purely research-based, with its facilities concentrated in the western part of the campus, in a building formerly known as 'Robert-Rössle-Klinik'.

Please use our location map to find the best access routes to specific facilities. Once inside the building, please follow the directional signage provided. 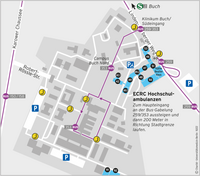 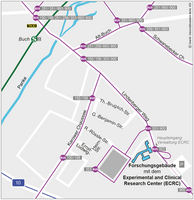 This area map shows the campus location within the Berlin neighborhood of Buch and provides information on public transportation.

If you would like to visit the former Robert Rössle Clinic at Lindenberger Weg 80, use the free car park at the turning loop of the road (see area map). Disabled parking spaces are marked directly in front of the clinic.

Information on the guest houses on the Campus Berlin Buch can be found on the website of the BBB Management GmbH Campus Berlin-Buch.