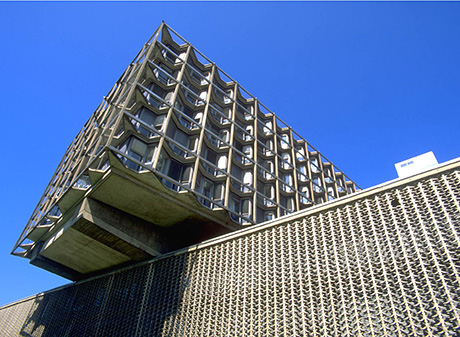 History of the Campus Benjamin Franklin

The division of Germany (and Berlin) into four occupational zones at the end of the Second World War resulted in Berlin's former university (Friedrich-Wilhelms-Universität) being confined to the former Soviet sector, thus leaving the Western sector without a university. This situation was remedied when "Freie Universität Berlin" (literally meaning Free University Berlin) was founded in 1948.

As the new university's medical faculty was initially based across various municipal hospitals, the decision was taken in 1958 to build a large new hospital complex. Construction work for Steglitz Hospital ("Klinikum Steglitz") began in 1959, and lasted until 1969. The U.S. contributed approximately one fifth of the total cost of the build, a gesture seen as "evidence of the United States' interest in securing the future of Berlin". As the first major hospital complex in Europe, the new building managed to combine all institutes, departments, and lecture theaters under one roof.

Over time, spatial constraints forced the relocation of various different institutes, which found new homes in both old and new buildings nearby. In 1994, the hospital was re-named the Benjamin Franklin University Hospital (UKBF) in recognition of the support received from the United States. At the time, the hospital was home to 36 research departments, and offered approximately 1,200 beds. In 2003, UKBF merged with Charité.